Exciting new updates and rollouts coming to Teams this month!

We've hit the ground running this month with lots of exciting new additions to Microsoft Teams, from customised backgrounds on the Web to front-row preview layouts for Teams devices. Read on for a roundup of our favourites.

Stay muted to avoid unwanted background noise during a meeting and rapidly respond when called upon. You can now use a shortcut to unmute by holding down the Ctrl+Space keys (Windows) or Option+Space keys (macOS), then release the keys to go back to muted state again. This feature is on by default. To disable, go to your Teams Settings > Privacy section and uncheck Keyboard shortcut to unmute.

Custom backgrounds are now available to web users. You can blur your background or select from Microsoft-provided backgrounds during your video meeting or call, making your meetings more fun and personal.

High-fidelity music mode enables Microsoft Teams users to experience richer sound experiences when sharing non-speech content such as live music, songs through other applications, or medical signals during a virtual appointment with a physician. High-fidelity music mode enables significantly improved audio quality in Teams calls and meetings. The optimised experience in Teams applies to signals captured by microphones as well as audio played while sharing an application or desktop.

Microsoft announced the general availability of the Walkie Talkie app in Microsoft Teams, with a dedicated push-to-talk button on a wide range of Zebra mobile devices, as well as general availability on any iOS mobile device such as iPhones and iPads. Frontline workers can enjoy clear, instant, and secure communication at their fingertips and collaborate seamlessly with anyone from anywhere across geographic locations. This will be helpful for our frontline workers as this new feature will reduce stress, help with training execution and modernise the Frontline worker experiences. 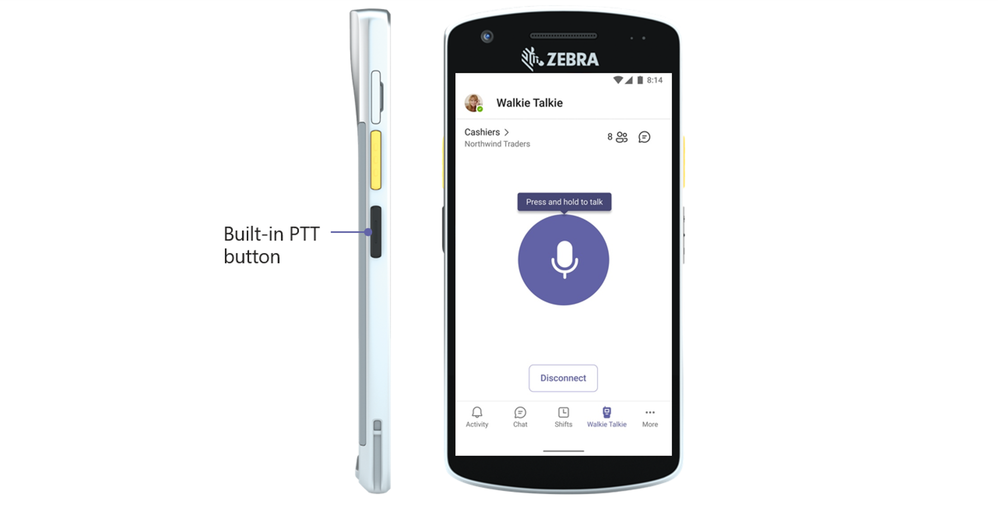 Front row is a new layout for Teams Rooms, designed to enhance hybrid meetings and provide in-room participants with greater context of what is happening across various aspects of the meeting. With front row, remote attendees are seen in the room at eye level and additional meeting experiences including chat, and a rostered view of participants with raised hands, are brought to the front of room screen. Front row (preview) will be available in the layout chooser experience on the Teams Rooms console. It can also be set as the default layout or turned off altogether by device admins. Front row is available for all Teams Rooms on Windows, single and dual display modes, and across all display sizes. It’s recommended you use 1080p resolution for an optimal viewing experience. This is the initial public release of front row (preview), with enhanced features to follow later this year.

Switch between multiple video cameras in Teams Rooms on Windows

During meetings in Teams Rooms with more than one video camera attached in the space, people in the room can switch between cameras—by choosing from the list of available cameras. If the device does not have multiple USB cameras set up with Teams Rooms devices in the conference rooms, there will be no difference in experience. For Teams Rooms with multiple video cameras attached, admins can also select a default camera from the device settings to be used when starting a Teams meeting or call. 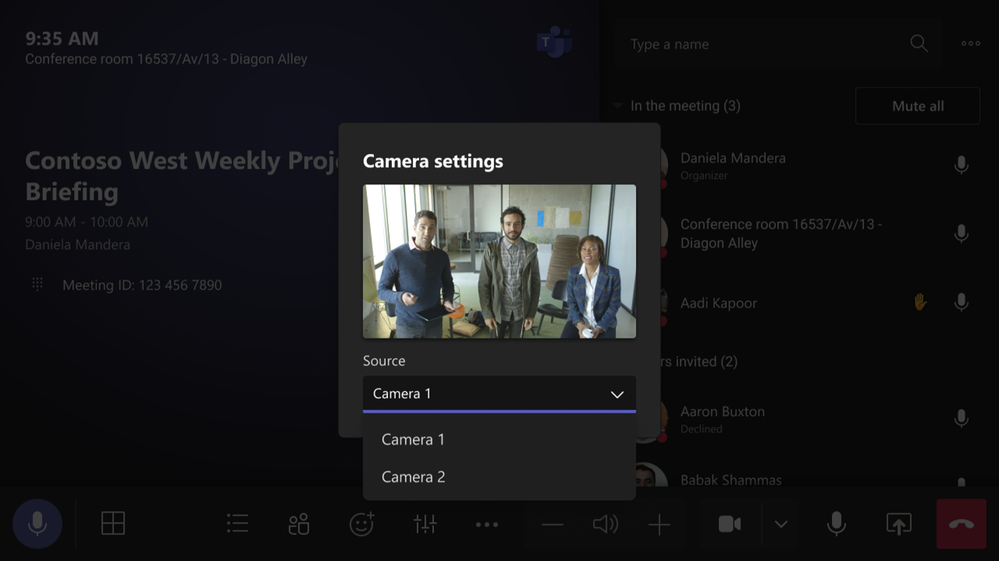 The mic icon is now replaced with the Cortana avatar to improve usability. You will see the updated icon in both the out-of-meeting and in-meeting UI. Cortana Voice Activation is also now enabled by default for new device installation—however you still have the option to disable this feature.

You can now use "Hey Cortana" to join meetings or perform other commands if your Teams Rooms are configured to use languages from these regions: Australia, Canada, Great Britain, India, and the US.

Making a call from Teams Rooms is now updated with a new Teams calling app. All peer-to-peer calling and group calling functionality that was previously under the “New meeting” button is now under “Call.” Using the Teams Rooms console, “Call” lets you dial a number using dial-pad where a calling plan or direct routing is configured for the room account, as well as access a search bar for peer-to-peer Teams calls, and group Teams calls. Enter the Session Initiation Protocol Uniform Resource Identifiers (SIP URI) which is available for modes with Skype for Business. This update is only applicable if the Teams Rooms is running in Microsoft Teams only, or Skype for Business and, Microsoft Teams (default) modes.

A new update to the “New Meeting” control on the Teams Rooms console is “Meet” (Meet now experience in Teams desktop client). With Meet, you can start an ad-hoc meeting with a single tap and invite participants to it. This change is only applicable if the Teams Rooms is running in Microsoft Teams only or Microsoft Teams (default) and Skype for Business modes.

This smart camera for large meeting rooms is now certified as a camera for Microsoft Teams Rooms on Windows. The Poly Studio E70 camera has dual lenses with 20-megapixel 4K sensors, providing a wide-angle and a narrow lens for maximum room coverage. The camera supports group framing and speaker tracking, with the unique ability to transition undetected between two lenses.

Designed to enhance communication and collaboration in the modern workplace, the Lenovo Go Wired ANC Headset brings several must-have features to the table. With Microsoft Teams Certification and cutting-edge ANC/ENC technology, both office and remote workers will have the Teams certified tools they need to tune out distractions and tune in to their work—all in one headset.

The Lenovo Go Wired Speakerphone brings enterprise-grade audio to the remote workforce. When you pair the omnidirectional far-field dual-microphone array with the in-call controls and effortless plug-and-play—you get a remote-friendly working companion. And now that it’s Teams certified, you can make the most out of collaborating, video conferencing, messaging, and more on Teams. 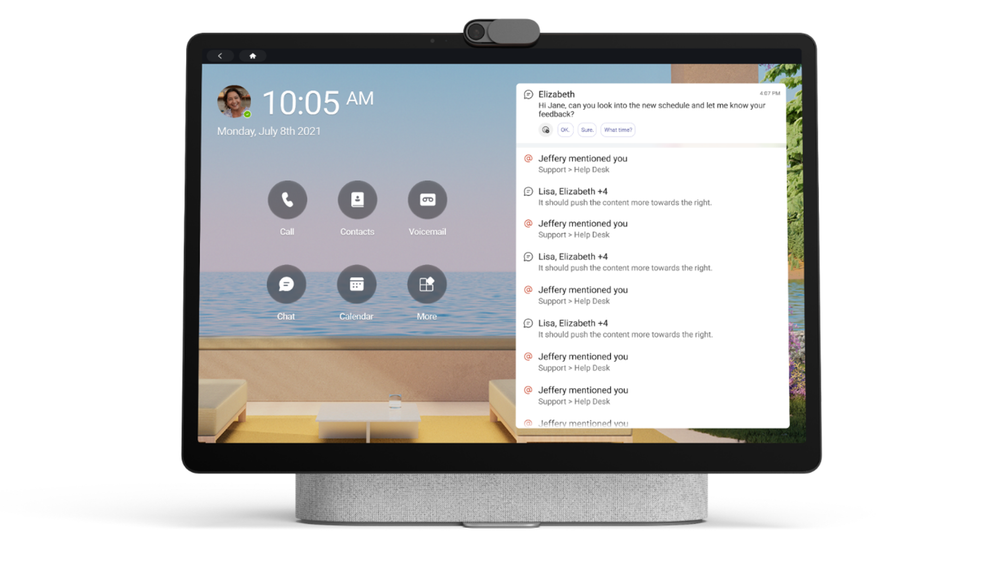 You can find out more about our Immersive meeting room solutions for Teams by clicking the link below, discover the power of bringing your team together wherever they work.

“Front row is a new layout for Teams Rooms, designed to enhance hybrid meetings and provide in-room participants with greater context of what is happening across various aspects of the meeting."